Split (Spalato) is one of the jewels of the Dalmatian region, the largest coastal city on the Adriatic coast and the second largest in the country after the capital Zagreb 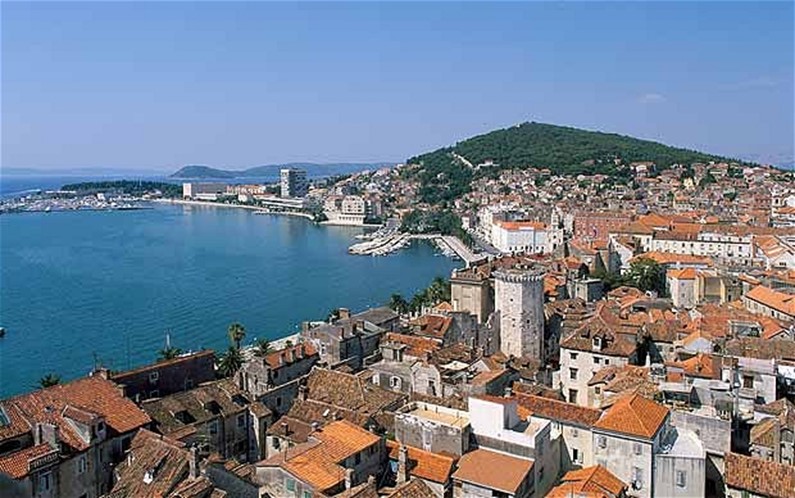 Split (Spalato) is one of the jewels of the Dalmatian region, the largest coastal city on the Adriatic coast and the second largest in the country after the capital Zagreb.

Brief history
In the 4th century BC the first Greek colonies were Tragurion (Trogir), Epetion (Stobrec) and Salonae (Solin).
Roman Salonae was an administrative centre of Illyria and later became the capital of Dalmatia province. It is a key archeological site on the east coast of the Adriatic and touches the Northern suburbs of today’s Split.
On the Split Peninsula near Salonae on the Bay of Aspalathos (Greek word for the Spanish broom bush), was a small Greek settlement of the same name, called Spalatum in Roman times.

Gaius Aurelius Valerius Diocletianus was an Illyrian probably born in Salonae in 245 who became emperor in 284 and a ruthless persecutor of Christians.  He started building his castle on present day’s Split, intending to retreat to it after his abdication for health reasons in 305. He would reside in the building until his death in 316 at the age of 71.
Stone materials were brought from quarries in Trogir and on the island of Brac.
It was a fortified palace on a quadrangular ground plan surrounded by strong walls and massive defence towers.

In the 7th century, Avars and Slavs destroyed Salonae, the population fled to the outlying islands or followed a certain Severus, taking refuge inside the palace compound which later became the medieval city of Split.
After spending most of the Early Middle Ages under Byzantine rule, the city became part of the Croatian State under king Peter Kresimir IV in the 11th century and  a free city in 1108 under king Koloman.
It was under the domination of the Venetian Republic in 1420 until the fall of the Serenissima in 1797 under Napoléon who ruled it from 1806 till 1813. From 1813 till 1918, Dalmatia was part of the Austrian Empire and after World War I joined the Kingdom of Serbia, Croatia and Slovenia which became the Kingdom of Yougoslavia in 1929. During World War II, it was occupied first by Italy and later by Germany in 1943 and finally liberated in October 1944. From that date on, it became a city within the Croatian Republic, part of Federal Yougoslavia, which was dissolved after the War of Croatian Independence (1991-1995).

Major Sights
The heart of the city was listed by UNESCO as a World Heritage Site in 1979, with Diocletian’s Palace as the major attraction : it is the best preserved antique imperial palace in the world. Diocletian was a successful military captain who fought against rebels in Egypt in 297-298 and brought back some black marble sphinxes that can still be found on the
palace grounds, together with numerous precious materials from Egyptian temples and buildings.  The Emperor was revered as a deity (Jupiter’s Son).

Key historical monuments are located within the Palace which covers an area of about 30000 sq m. It is built in the shape of a slightly deformed quadrilateral, measuring 215 m on its longer sides and 180 m on the shorter ones. A transverse street – Decumanus - running from east to west, divides the complex in two parts. The outer defence wall is protected by a total of 16 towers and the palace has four access gates  called Gold (Porta Aurea), Silver, Iron and Brass.  The groud-floor halls, called  « Diocletian’s Cellars », serve as substructures for the imperial apartments.

The most impressive architectural complex is the Peristyle giving access to the apartments and communicating with the Mausoleum built in 316 after the ruler’s death. It is used as a stage for the theatrical and musical productions of the Split Summer Festival. It is also the location of the city’s most popular café called the Luxor. Next to it stand the Grisogono-Cipci Palace and the City of Split Museum housed in the Papalic Palace.

When the Palace became a town, the Mausoleum became St Mary’s Cathedral soon after named Cathedral St Domnius,  a bishop who was Diocletian’s first martyr and patron saint of Split .  A belfry (bell tower ) in mixed Gothic-Renaissance style was added in the 13-14th century and a circular crypt below the mausoleum was converted into the church of St Lucy.
Not to be missed in the cathedral : the 13th century wooden portal (best preserved of its kind) with its walnut door panels of 530 x 360 cm, carved originally on a red background with gilded figures in relief.  The Romanesque stone pulpit, the carved wooden choir stalls,
the Baroque altar of St Domnius with an Early Christian sarcophagus, the altars of St Duje and  St Stasius and the northern Baroque altar of St Domnius.
The former quadrangular Jupiter’s Temple became the baptistery of the Cathedral.

Narodny Trg (People’s Square), also called Pjaca,  is the main square at the heart of the Old Town where stands the Communal Palace (former City Hall) connected with Korepic Palace by a Late Gothic double window. On one corner stands the late romanesque Ciprianis Palace with a carved relief figure of St Anthony. In front of the Roman Palace gate stands a Romanesque house-fort with Gothic belfry and a Romanesque clock.

Vocny Trg (Brother Radic Square), to the south of Narodny Trg. On the north side stands the 18th century Milesi Palace and in front of it the bronze statue of the famous Croatian poet Marko Marulic by Ivan Mestrovic. On can also see the Baroque Tartaglia Palace on the east side and the Little Papalic Palace on the west side.

Waterfront
The seaside promenade lined with palm trees, also called Riva, is always crowded and teeming with life during the high season (summer and Advent) with its numerous cafés and boutiques.

Trg Republike
It is the western limit of the old town centre. It houses the arcade-lined neo-Renaissance building of the Prokurative. Along the square runs the pedestrian street Marmontova ulica, named after Napoleon’s Marshal Auguste Viesse de Marmont who performed massive renovation and   modernisation during his short rule.

There are many other places of interest to discover : numerous churches, ruins, parks and the museums on the Marjan Peninsula, notably the Ivan Mestrovic Gallery building. The top of Marjan Hill affords a spectacular panoramic view over the city.

Split is possibly the most interesting city in Croatia : it is awaiting your visit and ready to welcome you to show all its treasures.